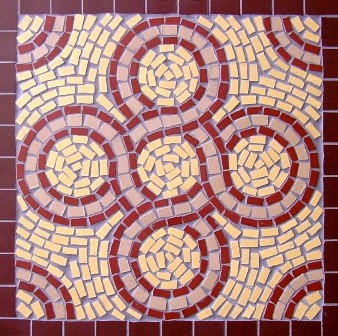 Roman Mosaics to visit in Great Britain / the United Kingdom

Several of the best Roman mosaics from Britain are on display here, including a fourth-century AD mosaic with a portrait of Christ from Hinton St Mary, Dorset, and one from Leadenhall Street in London, showing the wine-god Bacchus riding a tiger; also mosaics from Thruxton in Hampshire, Withington in Dorset and from Italy and North Africa.

The Museum of London

One of the best displays of Roman material in Britain, including the Bucklersbury mosaic, the largest surviving Roman mosaic from London.

Villa of the fourth century AD, with mosaics depicting Europa and the bull and Bellerophon and the Chimaera, as well as one of the earliest Christian shrines in Britain.

The owner of the lavish villa at Fishbourne was one of the first people in Britain to adopt a Roman lifestyle — and he did it on a grand scale, building himself a courtyard house with a central garden like the great villas of Italy, and commissioning craftsmen from Gaul or Italy to decorate it with mosaics in the latest fashion. The surviving wing of the palace has mosaics with elegant black-and-white geometric patterns in the Italian style, laid around AD75–80, and coloured ones from a redecoration in the second century AD. The palace was probably the residence of the local king Togidubnus (or Cogidubnus), and is unique not only in Britain but in Europe.

A wealthy villa of the fourth century AD, with some of the finest mosaics in Britain, including the famous frieze of Cupids playing at being gladiators. Also depicted are the goddess Venus, Ganymede being carried off by Jupiter's eagle, Medusa, and Winter from a set of the Four Seasons.

Villa of the fourth century AD, preserved under a brand new cover building, with mosaics depicting Bacchus, Medusa, the Four Winds, an astronomer, and numerous mythological scenes, some of which are so obscure that archaeologists cannot work out what they represent; one scene includes a mysterious figure of a cock-headed man.

Mosaics from the Roman town of Silchester (Calleva Atrebatum), mostly of the second century AD.

Roman villa with a spectacular mosaic (substantially restored) decorating a room with three apses. Some archaeologists believe this was a meeting-hall for the worship of Orpheus, who appears in the centre of the mosaic, but it is more probable that the apses were designed to hold three semi-circular dining-couches — the only example in Britain of a type of dining-room that was the height of fashion in Italy and north Africa in the fourth century AD.

Several mosaics from the town and nearby Sparsholt.

One of the finest Roman villas in Britain, with fourth-century mosaics laid by craftsmen from nearby Cirencester, including pairs of mythological lovers and Cupids dressed as the Seasons.

Cirencester (Roman Corinium) has one of the best collections of Roman mosaics in Britain, in a newly designed and superbly laid out museum. The beautiful second-century mosaic of the Seasons has been incorporated into a reconstruction of a Roman house. In the fourth century AD two groups of mosaicists based in Cirencester made mosaics for the many wealthy residences in the town and villas in the Cotswolds: the Corinium Museum has an impressive display of their work, including a scene of Orpheus surrounded by the wild animals who were charmed by his music, which was a local speciality.

Dorchester, Dorset County Museum
Dorchester (ancient Durnovaria) was the base of a group of mosaicists in the fourth century AD, and the Dorset Country Museum has an excellent collection of their work from the town and nearby villas. You can also visit a Roman town-house with mosaics at Colliton Park, behind County Hall.

Taunton, Somerset County Museum
The collection includes a fourth-century mosaic from Low Ham, with a series of scenes telling the story of the love affair of Dido and Aeneas from Virgil's Aeneid, and a fragment of mosaic from East Coker which shows a hunting scene based on a motif from north Africa.

The Midlands and East Anglia
Colchester Castle Museum
Colchester was a Roman colony and one of the leading towns of Roman Britain, and accordingly its museum has the best Roman display in the country outside London, with several mosaics including one of Cupids wrestling.

St Albans, Verulamium Museum
St Albans (Verulamium) was another important centre in Roman times, and a house-building boom in the second century AD generated a huge demand for mosaics, many of which are now displayed in the museum. The bath suite of one of these houses can be visited, with mosaics in situ (in Verulamium Park: follow signs to the Hypocaust from the Museum car park).

Leicester, Jewry Wall Museum
Three mosaics and, more unusually, several expanses of decorated wall plaster are preserved in this museum; substantial remains of the town's Roman baths survive next to the museum.

Hull, East Riding and Hull Museum
An outstanding collection of mosaics with fascinating figured scenes based on models from the distant Mediterranean, often rather eccentrically interpreted by the local craftsmen: a victorious charioteer; sea creatures; Tyche (Fortune) surrounded by water-nymphs; fragments of a huge pavement from Horkstow depicting Orpheus and the animals, a chariot-race and a design imitating a domed ceiling; and a bizarre Venus, surrounded by scenes of wild beast hunts in the arena.

York, Yorkshire Museum
Several mosaics from the town and around.

Aldborough Roman Town, North Yorkshire
Two second-century mosaics are visible in situ at this small Roman town, and a fragment of a third, with an inscription in Greek, is on display in the site museum.'